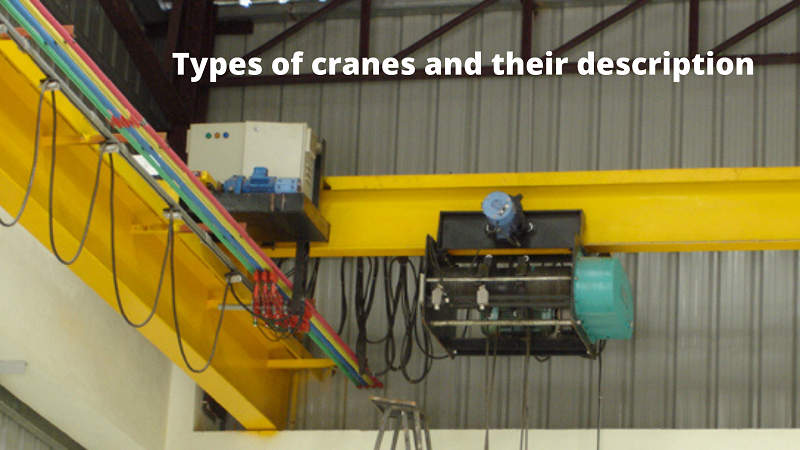 Cranes are one of the most common machines you will see in big and small industries. The main purpose of the crane is to ease up manual work by lifting heavy weights with the help of mechanical arms. There is a crane operator who is assigned the work of driving and operating the crane as he is the expert and has experience in crane operations. In any construction work you will definitely find cranes deployed on site as they prove to be extremely helpful and efficient to ease the work. There are different types of cranes available and each type is used as per the requirement of the particular industry. In this article, we will be seeing and discussing each and every type of crane available and their usage in the best EOT Cranes Manufacturer in Ahmedabad.

EOT cranes which are popularly known as Electric Overhead Cranes are one of the most popular and widely used cranes in industries for lifting and shifting heavy weights. These cranes are electrically operated. The gap between the parallel runways is spanned by a travelling bridge while the hoist is mounted on this bridge.

As the name suggests, single girder cranes consist of single bridge girders which are supported on two end trucks. The cranes runs on the trolley hoist mechanism where the trolly and hoist runs on the bottom flange of the bridge girder

These cranes are usually used in industries where the lifting and shifting of heavy materials is required where they are used only for the purpose of manufacturing and maintenance. With the help of these cranes, heavy materials can be moved and lifted very easily and quickly and have high durability which enhances overall production and eases industrial operation.

There are various ways in which jib cranes can be extremely useful for you and one of the most advantageous things about these cranes is that they are very budget-friendly. These cranes are extremely durable and robust and have enough capabilities of lifting heavy weights with ease. They can easily be moulded to cater different kinds of industrial requirements as they have broader reach and enhanced efficiency

One of the important and noteworthy things about Hot cranes is that they are not used in construction sites but are used in industries where lifting and shifting of heavy weights is required. These cranes have higher efficiency and are used to handle the manufacturing process of metals. The entire workload can be easily taken by these cranes as they have the capability to ease up the entire work from refining of the metals to dispatching it.

Gantry cranes have exceptional moving ability and dynamic design which makes them extremely flexible and easy to mount and use. These cranes are used to lift and carry heavy objects from one place to another in industries and construction sites with extreme convenience and ease.

The construction of these cranes is such that the trolly is supported rigidly on two or more legs running on a runway or on fixed rails. Other than this, everything is similar to the regular overhead cranes. The legs on these cranes eliminates the supporting runway and column system completely which makes it flexible and more efficient in operations.

Monorail runs on the trolly hoist mechanism which is sometimes essential for some applications like production assembly line or service line. This trolly hoist mechanism is exactly similar to single girder cranes except the fact that these cranes do not have a movable bridge and the hoisting trolly runs on the fixed girder. In terms of beams and construction, Monorail beams are usually I-beams.

What is EOT crane

EOT cranes are also known as Electric Overhead Travelling cranes which are electrically operated and are most frequently used in construction sites and industries. These cranes run on electricity and are usually operated either from a control room which is attached to the crane or with the help of a pendant. These cranes are capable enough to lift heavy loads and can easily move and lift light loads with ease as well.

Opposite to single Girder EOT cranes, the double Girder EOT cranes are used for lifting and shifting heavy loads. As compared to single girders, double girder cranes are cost effective as they can almost lift double the weight as compared to the single girder ones. They are compatible with wide pans and have two main bridges in their construction that makes it durable as well as sturdy in nature.

As we all know by now, EOT cranes are electrically operated hence they are either operated from the control panel attached to the crane or can also be operated with the help of a remote control called a pendant. With a span of 60 mtrs, these cranes are capable of lifting up to 500 tonnes. In order to facilitate the installation and adjustment, these cranes are designed in such a way that they work on universal coupling mechanisms. In this mechanism,the crane consists of only four active and driven wheels and the wheel pressure is reduced accordingly on the basis of the increased weight that has to be lifted. The weight management is done in such a way that the whole weight does not pressurise only a particular wheel and distributed evenly on all the four wheels.

Single girder or double girder, which one should you choose

The three major working movements of EOT cranes include crane hook up and down lifting, trolley lateral movement and crane long travelling longitudinal motion. The driving force of the motor is exhibited by the hoisting mechanism which transmits the power to the high speed shaft end. With the help of pulleys and wire ropes, the crane hook is driven up and down as the ring gear transmits the driving force. In order to rotate the trolley wheels, the half gear coupling, its joint and the compensation shaft comes into play.

Under Cranes, its advantages and disadvantages

The only way by which an under crane can be identified is the fact that they are supported structure and run on the bottom flange of runway girders. The standard lifting capacities of under cranes is usually up to 10 tonnes and provide close headroom and amazing side approaches.

One of the biggest advantages of under cranes is that they provide maximum utilisation of the building width and height owing to the small trolley approach. ANother advantage is that the possibility of using the existing ceiling girder is maximised in order to secure the crane track

In terms of disadvantages, the hook height of the under cranes is reduced due to the location of the runway beams. Also, the load which is being applied to the roof is always greater than that of a top running crane in comparison.